It is an open source auditing and testing framework, created by Chef. It is Ruby-based domain specific Langauge, for defining the controls for testing infrastructure.

It has profiles to define test and controls used for testing and auditing.

To audit Docker platform, an InSpec profile is available which has CIS Docker Benchmark.

Auditing a Docker Platform against CIS

It does not matter which flavour operating system we are using as the Bench mark is platform agnosting means equally well on most linux distributions. Lets check our flavour of OS.

So, in order to run Docker Bench for security we first need to clone it from Docker's Git hub repository.

It is located at :

once cloned, move inside cloned directory.

To get help about how to use docker bench security.

Getting back to your "docker benchmark logs" under Host Configuration. 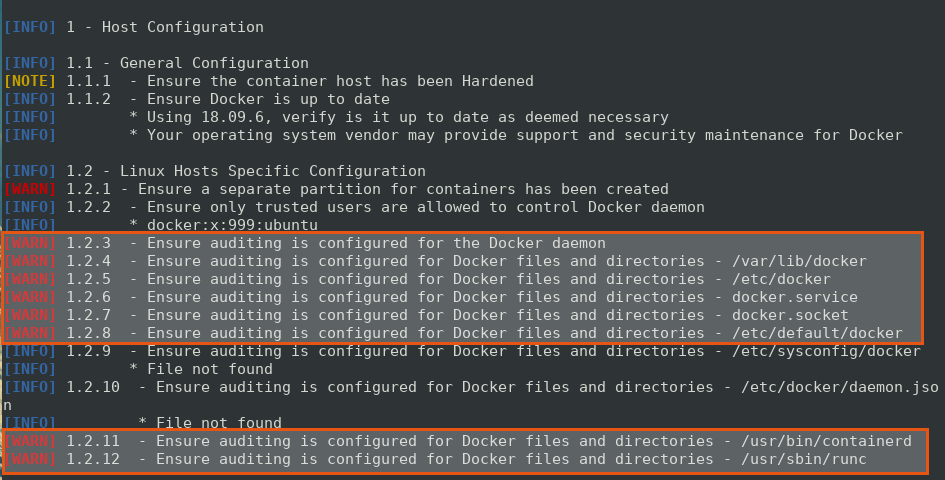 Here, we see the highlighted [WARN] section having message

Once the audit framework is properly installed in linux, then the actual auditing take place in linux kernal.

Now we know what is Linux Audit Framework and hence its time we understand what it is for ? On the basis of CIS Docker CE benchmark, we need following things to audit.

Lets install audit framework and do the audit in order to pass the result obtained by docker bench security.

To check already running any auditd process in host system

lets check if audit framework is already installed in our system.

if not installed then, its time we install it.

To verify installation we can check for running daemon of auditd by pidof.

Before doing anything, check aureport for events or summary of all events stored inside audit.log 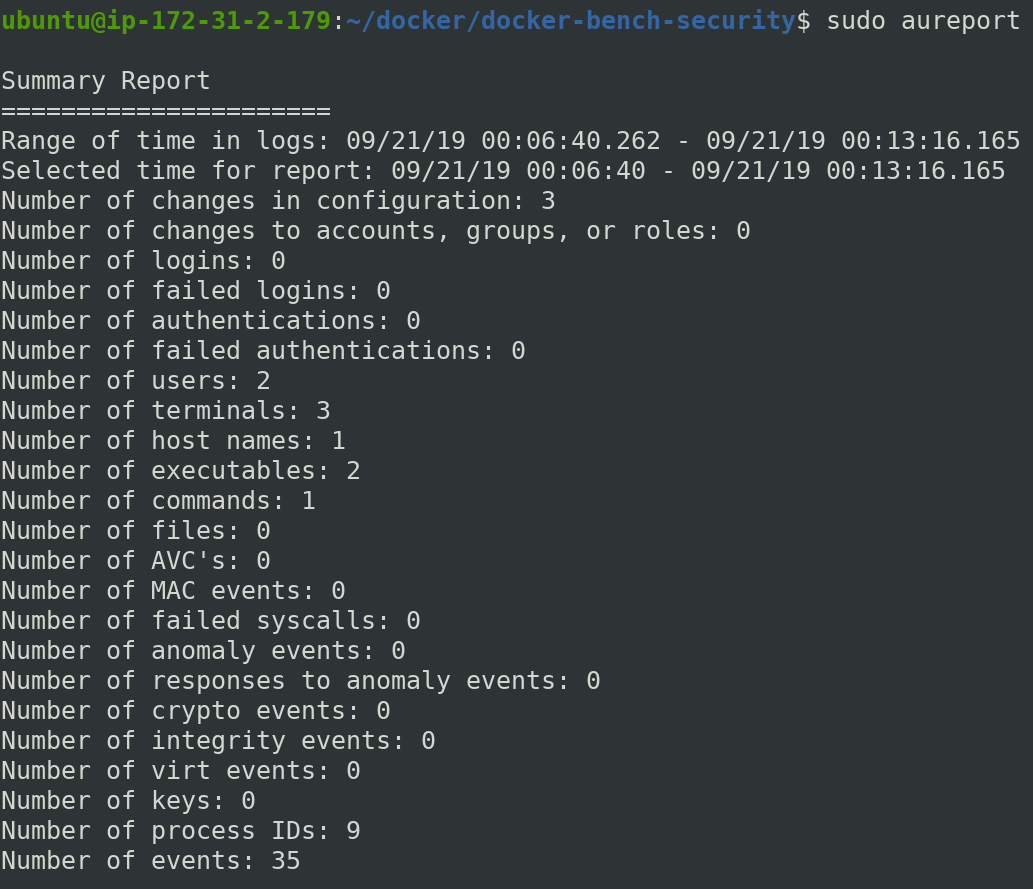 Now lets add an audit rule and start with Binaries that is docker.

I hope till now you know how to find locate of particular command.

We will make use of audit's CTL utitlity to add the rule.

Now dockerd is on our watch list by our audit framework any event generated at dockerd will be logged under audit event. Lets generate ab audit event.

we can check audit report summary by aureport.

We see a number of key based reports, ignoring all the above and focus on last highlighted key report. You may also filter out by using below commmand.

It will give you verbose information having type, time and many other things

But to smplify and get it as human readable we can pipe the verbose detail given by ausearch to aureport.

Also if you go back to Docker benchmark logs. You will see we have changed status to passed of docker daemon that is from [WARN] to [PASS].

We can follow same step to change other audit bencharks to pass.

when you check CIS Docker benchmark again for Host Configuration.

The audit rules which we just created above are not permanent, if the system restarts or the audit daemon then, all the created rules will be lost. So we need to save the audit rules in /etc/audit/audit.rules

Note: Audit.rules is an empty file waiting for rules to be added.

You may mannually save all the rules or use below command to save it in one go.

Lets finally check our docker bench for security for our host configuration. 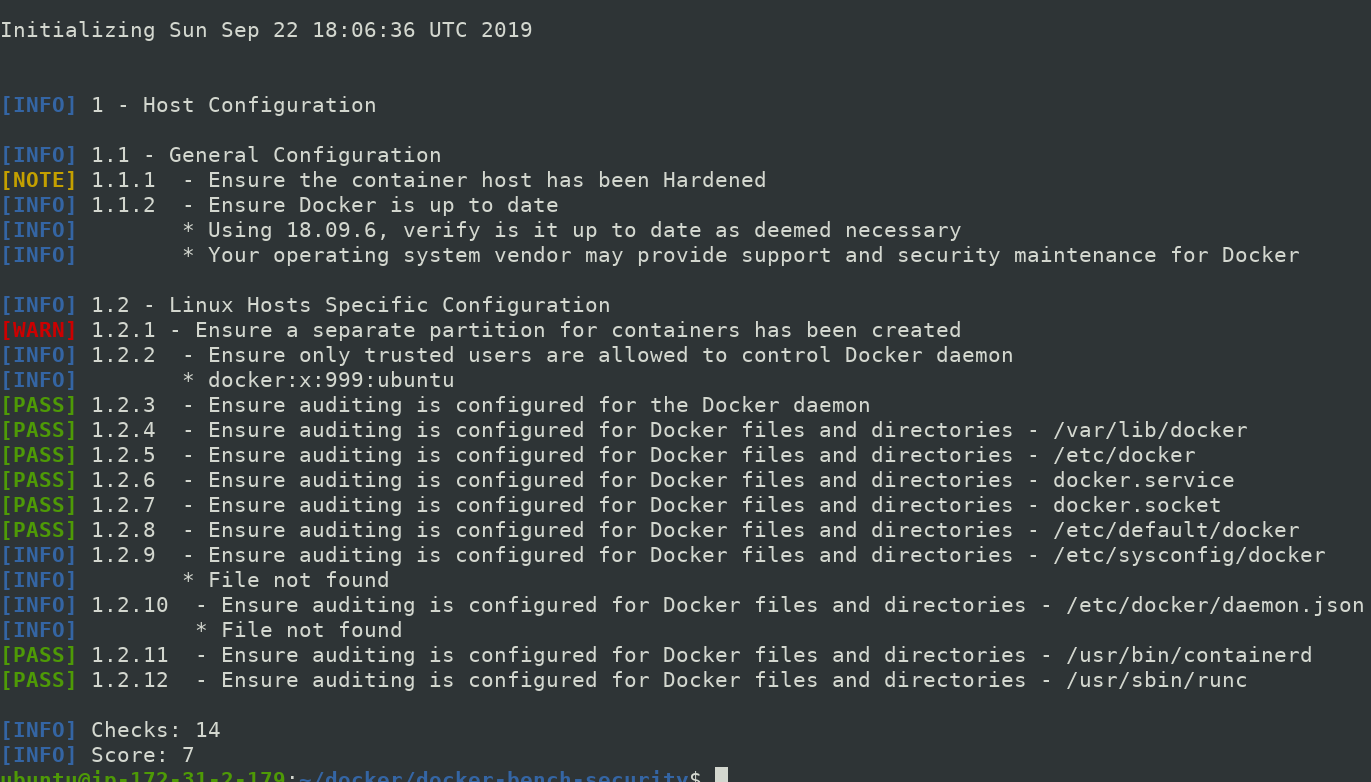 Here, configuration 1.2.1 is still not [PASS] because I am using an aws instance so it is little messy to create partition and also out of scope of my talk.

Remember when docker creates a container, the default behaviour is that the container process is not created in a new user namespace. To do so we need to set explicitly.

In order to set user/group for re-mapping. We have two approaches for the same

If we want Docker to handle this then we need to set userns-remap to default.

You will see that docker client pulls a new image from docker hub and stores it locally. It will give you a shell. Once you are in lets check all the process by ps

Here, we have single user root which is default user with process ID 1.

Here, it looks like both are different process but these are same. The root user with PID 2590 is same as root inside the alpine container with PID 1. Hence even our sh shell is running inside the container its owner root is same.

If somehow, anyone is able to escape through the contained environment that is alpine. He/She can conduct serious damage to host system as root system has highest privileges.

In order to solve this, we need to implement User Namespaces feature. But before that have a look at our subordinate user IDs.

We have another container platform lxd , local users and root users listed in subuid file.

Before doing any configuration, stop the running alpine container.

Now open file /etc/docker/daemon.json for implementing Default user namespaces as I mentioned that earlier as two approaches for setting user and Group mapping.

This file may or may not be present on host system depending upon the kind of Linux OS been used.

Once opened, add following line of code in it.

Restart docker to save changes

It will create a new subordinate user dockremap.

while the image is locally present, it still pulls the image from dockerhub, because once User namespace is enabled. it can not use the image of root other user.

Now the process has privileged owner inside the container but non-privileged user in host default user namespace.

Also we can see the subdirectory created for mapping

This is where content of alpine is resides. Now if somehow even if the someone escapes the container but it will still have lowest privileges.